#05 | The (not) so desired hydrogen: from Grey to Green Hydrogen

With the focus on decarbonization, hydrogen is gaining more and more traction in the power, transportation and energy fields. Often referred to as the energy of the future, hydrogen was to be the solution to most of today’s issues in terms of energy dependence, fossil fuel carbon dioxide emissions and even energy storage for renewables.

“[…] our scientists and engineers will overcome obstacles to taking these [hydrogen fuel cell] cars from laboratory to showroom, so that the first car driven by a child born today could be powered by hydrogen, and pollution-free.” George W. Bush, 2005.

But why can’t we afford a hydrogen car? and, why has hydrogen been one of the clean technologies with less growth on the market, compared to other technologies which have seen a steady growth and development (such as electric cars, offshore wind energy, high power DC grids or even PV panels), and whose capital cost keeps on getting lower and lower?

When hydrogen is ignited, or when it is consumed in a so-called fuel cell (a highly efficient engine that runs without combustion) the only product is clean, pure water. A hydrogen powered car has no direct emissions, no carbon dioxide causing greenhouse effect, no NOx or particles are emitted polluting our cities, there is virtually no impact on the environment from its use. Furthermore, hydrogen is “the most abundant element on the universe”. And that is a fact, 75% of the universe is made of hydrogen. But that comes with a twist…

An energy vector, not a source

The only hydrogen in its pure form that can be found on planet earth is at low concentrations on natural gas reservoirs, mixed with methane, ethane and other hydrocarbons. The other remaining >99% is in the form of water, a stable product resulting from hydrogen’s combustion. To produce hydrogen thus, one must split the water molecule, and that requires energy, lots of it.

Thus, hydrogen is not an energy source, but an energy vector, and not a very desirable one: hydrogen is very reactive, flammable and explosive, it attacks most metal alloys, it must be stored under lots of pressure (700 atmospheres, compared to 250 for methane), for its energy density in terms of volume can’t compare to other fuels. It is so difficult to contain that it even escapes Earth’s gravity. These factors, combined with a low overall generation-utilization efficiency, and a need for exotic materials on fuel cells, make hydrogen expensive when compared to, for instance, electric cars. 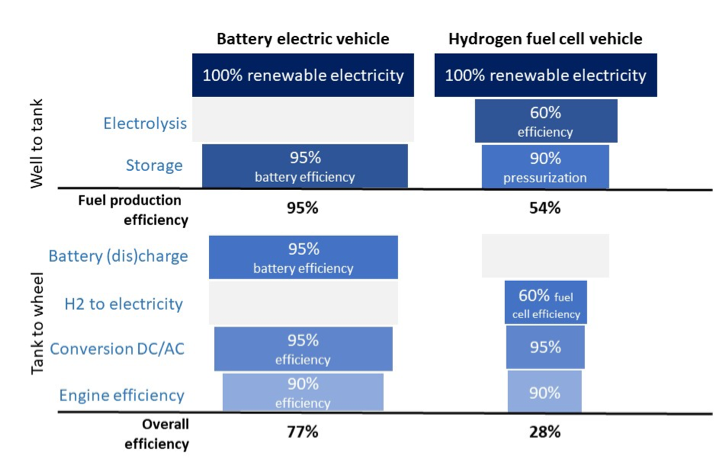 So, why all the early years hype? To understand why hydrogen has been promoted as an energy source one must understand that most of hydrogen being generated industrially for the petrochemical industry the past decades was produced via Steam Methane Reforming of natural gas (grey hydrogen), that is, fossil fuels. Hydrogen greenhouse gas emissions are hidden during the manufacturing process, and that was exploited by the oil & gas industry.

The focus nowadays is now on “green hydrogen”: hydrogen produced through electrolysis of water with renewable energy. Costs and energy usage are still high, but decreasing. In the LIFE NIMBUS project, more efficient means of producing hydrogen are evaluated, and hydrogen is only a temporary energy vector, for the true energy vector is the biomethane produced by reacting the carbon dioxide in the biogas and hydrogen. This biomethane is much easier and safer to store, and could be directly injected into the grid, or, in the case of the LIFE NIMBUS project, be directly used for urban transportation.