With the Russian invasion of Ukraine this year, the energy markets worldwide, and especially in Europe, have been shaken to their bedrock. Supply of oil, diesel, raffinates and, especially, natural gas from Russia has been compromised or interrupted altogether. But in the first place, how did the European Union end up with such a bad hand, depending to that extent on imports of natural gas?

Shift to cleaner energies and need for natural gas

For the past two decades, the European Union has been steadily ditching the more-polluting sources and methods of producing electricity and energy, such as coal power plants, as well as halting the development of nuclear energy, with some exceptions (see France for nuclear energy and Poland for coal power plants). These sources of energy have been gradually substituted by much less-polluting renewable energies such as wind parks and photovoltaic power, with a very low operating cost (although requiring high capital investments) and a defining characteristic: production fluctuation and uncontrollability.

Such renewable energies needed backing by natural gas power plants, both for controllability of the electricity grid and since wind and photovoltaic implementation was not enough to cover all electricity needs required by the new void created by receding coal and nuclear. With a much lower carbon footprint than coal and other fossil fuels, natural gas was then seen as a necessary and temporary partner in decarbonizing electricity and energy markets.

Europe and the European Union is not a large producer of natural gas, with very few gas fields and most of them half or depleted, it depends largely on imports both by pipelines and Liquified Natural Gas (LNG) shipping. Russia was meant to be an ally by supplying cheap gas through gas pipelines such as the recently sabotaged Nord Stream I and II, which directly connected Germany and Russian gas fields.

RePowerEU and its implications

RePowerEU action has recently risen to adapt the European Union energy markets for this new context, which is not expected to ameliorate spontaneously. The main target of the RePowerEU policy is clear: to obtain full independency from Russian oil and gas by 2027. Attaining such an objective in 5 years will require an effort and investment comparable to waging. It is expected that 210 billion euros will need to be invested before 2027 to execute RePowerEU.

Some of the mechanisms drafted to achieve this are: 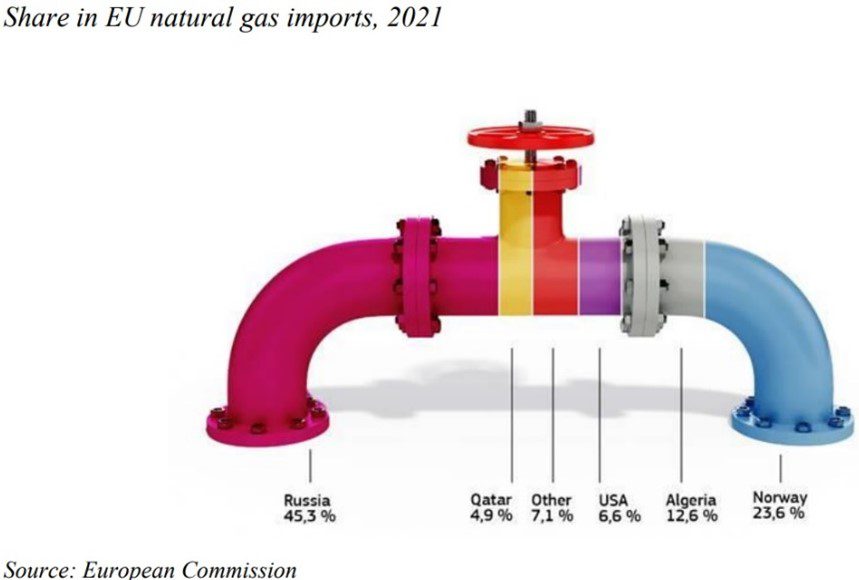 That last point is a major boost for the biomethane market, with its current annual production at 3 bcm (x11).

After seeing soaring inflation due to gas and electricity prices, all European countries are stocking up on natural gas in their gas wells, with a target of 90%. As an example, Spain has already met that figure and plans on increasing it by also storing it in the LNG regasification terminals. With temperatures decreasing, Spain’s storage can cover the needs of approximately 40 days. Europe is doing its homework for this new context while temperatures keep decreasing, and as it has been seriously commented in several summits “winter is coming”.