Scientists nowadays are seeking for a sustainable and techno-economically viable methodology for green hydrogen production. Among the plethora of opportunities for hydrogen utilisation, NIMBUS will show that it can be used for the conversion of the CO2 in biogas to biomethane. Besides hydrogen from water electrolysis, NIMBUS will demonstrate, for the first time at high scale, the opportunities for hydrogen generation from urban wastewater using bioelectrochemical systems (BES) in a device known as Microbial Electrolysis Cell (MEC).

BES combine electrochemistry with the metabolism of microorganisms. A MEC consists of a two-chamber device with an anode and a cathode separated by an ionic exchange membrane (Figure 1). Microorganisms are located on the anode whereas abiotic hydrogen production occurs at the cathode. These microorganisms are known as exoelectrogens or anode-respiring bacteria (ARB) and are naturally enriched from an anaerobic inoculum in the presence of an anode. ARB are able to degrade organic matter and transfer the electrons to an insoluble electrode. These electrons travel from the anode to the cathode through the electric circuit and reduce protons on the cathode, thereby forming hydrogen. MECs have the potential to become an alternative to conventional wastewater treatment processes as they can remove the organic matter simultaneously to the recovery of valuable products: recovering the energy contained in the chemical bonds of organic substrates as hydrogen. 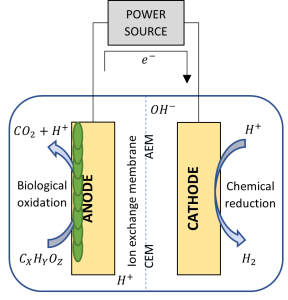 Thermodynamics in a MEC indicate that the overall process is non-spontaneous and a minimum applied voltage of 0.13 V is required to drive the reactions (assuming acetate as organic carbon source). This value is one order of magnitude lower than the theoretical value for hydrogen production, 1.23V and this is the main reason for the recent gain of attention of MEC. In reality, the inherent voltage losses increase to a large extent the requirements in applied voltage. The common voltage applied in MEC at lab-scale to drive hydrogen production is reported to be not lower than 0.6V, being usually between 0.6 and 1.0V. Despite this, the voltage required is still much lower than that needed in real water electrolysis.

So far, lab studies with MEC have been successful and have demonstrated MEC to be the biological technology with higher yield of hydrogen produced per unit of organic matter. However, most of the studies have been conducted in small reactors (i.e. reactor volumes below 100 mL) leading to H2 production rate up to 6–10 m3/m3/day with the most favourable conditions and readily biodegradable substrates. This value decreases significantly when real wastewaters are used and the scale is increased.

The current attempts to produce hydrogen from real domestic wastewater at higher scale have not been as successful as desired and low hydrogen production rates have been obtained. The research group from UAB has been working in the scaling-up of these systems and has designed a novel pilot-scale MEC that will be run in LIFE+ NIMBUS and it will be the largest double chamber MEC built so far (with more than 1m3). Many improvements have been integrated in the design to decrease overpotentials (e.g. increasing the ratio of electrode surface area versus volume) and to decrease the construction costs (e.g. using catalysts other than Pt such as Ni).

The plant (Figures 2 and 3) has just been placed in the wastewater treatment plant on March 2022 and we believe it will be pave the way in the objective of bridging the gap between lab-scale and full-scale implementation of BES.

Figure 3: Detail of the arrangement of the cells in the BES unit