#07 | Understanding CO2: biogenic and fossil, what are the implications?

Carbon Dioxide, or CO2, is one of the most known molecules by the general public. If anyone were to give a thought about CO2, it would be an immediately negative one: CO2 is bad, and we are doing huge efforts in order to avoid emitting CO2 into the atmosphere, in the form of clean, renewable energy. In reality, humans have much to thank to CO2, for life would be much harsher with decreased concentrations of CO2, but it is a double-edged sword.

CO2 is a naturally occurring molecule on nature: it is the product of a combustion or oxidation reaction. Animals of all types exhale it, from fish to humans, as well as dinosaurs did before its extinction. Forest fires, dead decomposing organisms and plant root respiration emit thousands of millions of tons of CO2 annually on planet Earth and have been doing so for millions of years. In fact, were it not for CO2, the average temperature on Earth would not be the current comfy 14ºC, but a ruthless, hostile -18ºC: CO2 is the main contributor on our atmosphere to the greenhouse effect, which warms up the planet by trapping infrared emissions while letting sunlight radiation through. These natural sources of CO2 are referred to as biogenic and are mostly unrelated to anthropogenic activities. 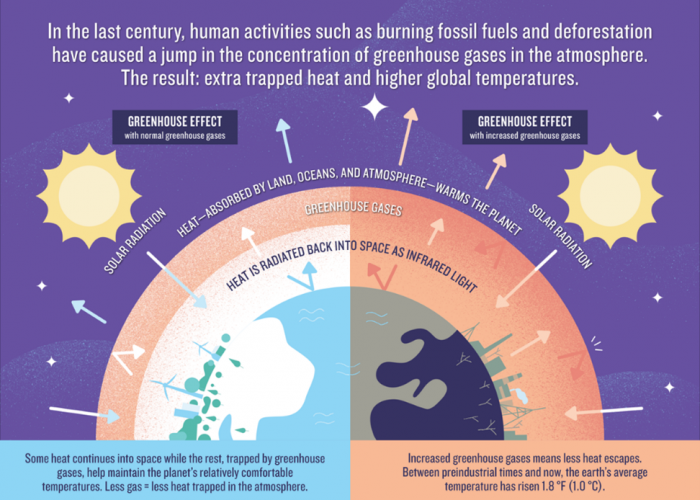 When talking about CO2 then, one must understand the mechanisms for its emissions, as well as the mechanisms for its sequestration. Plants and trees capture CO2 from air by using sunlight energy and transform it into carbon for building its structure, in a process known as photosynthesis. The oceans maintain an equilibrium with CO2 by absorbing it as carbonic acid as well as marine deposits of calcium carbonate (limestone). Overall, there is a natural equilibrium between biogenic emissions and assimilation of CO2. This equilibrium, with its resulting concentration of CO2, has been maintained since the formation of planet Earth, and has been fluctuating periodically over very long times due to major external events, such as periodically oscillating tilt angles of planet Earth. 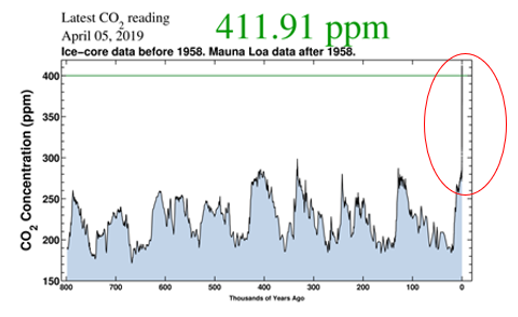 Since the first Earth Day, the planet’s CO2 levels have gone off the rails – Mark Kaufman, Mashable, April 2019

However, in the past 200 years or so, human activities have started making use more and more of fossil fuels such as coal, oil and natural gas. These fuels, when combusted, also emit CO2, which is chemically the same as biogenic CO2. However, this carbon had been trapped for millions of years underground, and its associated CO2 emissions are not biogenic, but fossil. These fossil emissions during all these years have not been compensated by more natural mechanisms for CO2 removal, leading to a sudden spike of CO2 concentration. 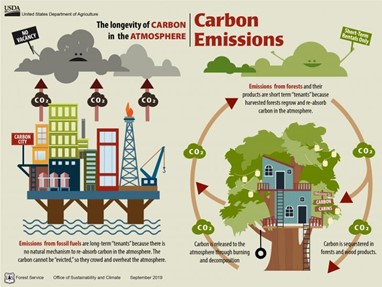 Usually, when defending arguments to fight climate change, protection of planet Earth and its species, such as polar bears, is cited as a must. Earth has withstood for billions of years, life has evolved, and where some species have perished some have thrived in new conditions. The meteorite might have been the end to the dinosaurs, but it sure was a great start for smaller mammals. However, human species need protection, for it entirely depends on meteorology for securing its food and basic needs, and the future impact of rising CO2 levels to these needs is yet to be unveiled. To end with a thought: Last time that CO2 concentration was this high, humans did not exist yet on planet Earth, for it was over 3 million years ago.